(Seguin) – It was double the recognition this Sunday as the Seguin Main Street Program presented awards to businesses, organizations and individuals who contributed to the growth of downtown Seguin in 2019 and 2020. The awards presentation was part of a blending of both the annual Moonlight & Roses event and Summer Concert Series in Central Park. Due to the COVID-19 pandemic, 2019 recipients were also recognized and grouped into this year’s presentation.

Named as the Downtowner of the Year for 2019 by the Main Street Advisory Board is the Smith Family for its purchase and operation of the Schultz Saloon at 113 N. Austin Street.

Announcing the winner was Seguin Mayor Donna Dodgen. Dodgen says in 2018-2019, the Smith family oversaw the remodel of their building that has stood for 100 years.

“Once the construction was complete, the family opened the Schultz Saloon with a specialty in whiskey. (We thank them) for making a large investment in downtown Seguin and opening a new business that is bringing locals and visitors to downtown Seguin,” said Dodgen.

Named as the 2019 Volunteer of the Year was the Seguin Art League. Dodgen says the art league is a completely volunteer run nonprofit that is currently in the process of rehabbing a downtown building. That building will soon serve as the city’s new art center. She says in addition to promoting current works, volunteers have each physically rolled up their sleeves to help get the building in order for contractors.

The recipient of the 2019 Beautification Project of the Year Award was the city of Seguin for its rehabilitation of the Development Services Center at 108 E. Mountain. The city is applauded for transforming the former auto garage into not only more space for the city but a more attractive building in downtown.

The final award presentation for 2019 was the Partner Award. This year’s recipient was the Downtown Business Alliance of Seguin. Dodgen says the DBA is being recognized for officially relaunching itself in early 2019 and for taking over the hosting of Third Thursdays. She says in addition to their annual efforts like Sip’n Stroll, the DBA began an aggressive marketing campaign ensuring the message of shop, dine, and unwind in downtown Seguin.

As mentioned, those making contributions to downtown Seguin in 2020 were also recognized. Honored as the 2020 Downtowner of the Year was Freddie Leos. Leos was praised for the rehabilitation of the Hot Spot building on East Court Street. For years, the building sat boarded up and is now a focal point in that location. He is also recognized for the opening of Soel Venue in 2019. The downtown location is now host to weddings, receptions and other special events.

Downtown business owner Dana Hall was also named the 2020 Volunteer of the Year. Hall during her service on the Main Street Advisory Board is said to have played a large role in the success of downtown. She is described as “the voice of all businesses.“ 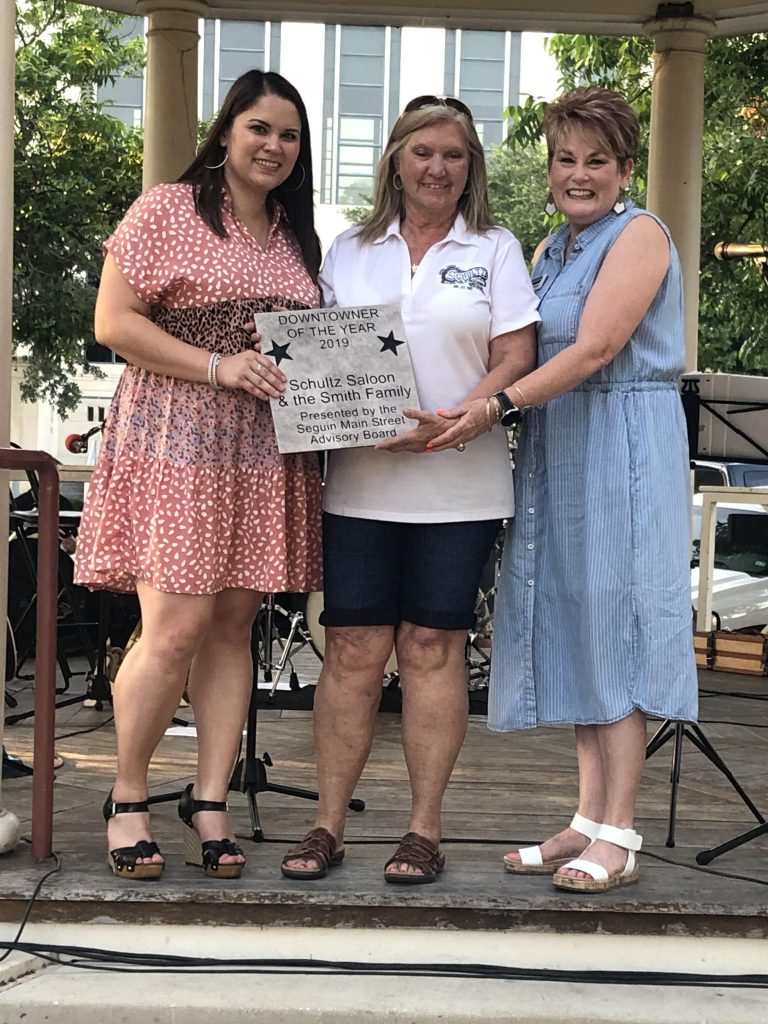 The 2019 Downtowner of the Year award is presented to the Smith Family represented by Velma Smith, center.

Dodgen says Hall not only led the charge to relaunch Seguin’s Downtown Business Alliance but she also took on the role of its president and all while operating her own business You’re So Crafty.

Next on the awards list was the 2020 Downtown Beautification Award. The award was presented to Jason Howell for his work of the Hugo Starcke Building. Dodgen says while this building is not in downtown Seguin, it “lies at the entrance into downtown on Austin Street. The five bay commercial building was in a state of disrepair and was nearing the threat of being demolished. Jason had the vision to restore the building that now houses four new businesses and is encouraging further redevelopment of the depot district.”

Receiving the 2020 Partner Award was the Seguin Economic Development Corporation. The SEDC was recognized for its continued work throughout the COVID-19 pandemic – further strengthening its relationship with Main Street. Together, they launched “the Seguin Strong Stimulus Program and (helped with) the conversion of our small business trainings to webinar format.”

Main street’s advisory board this past year also chose to add a new award to its 2020 list of recognitions. This award is called the Hometown Hero Award and was presented to Denise Crettenden. Dodgen says in February, HGTV announced that they were looking for a new community for a new show called Hometown Takeover. She says “Denise rose to the challenge of submitting Seguin for the show, volunteering her and talents to produce the nomination video that included organizing a community rally in Central Park.” Although Seguin was not selected, the board felt that Crettenden highlighted the city’s passion for downtown and helped share it with others.

The Seguin Daily News will have photos of the rest of this year’s winners in Tuesday’s edition.