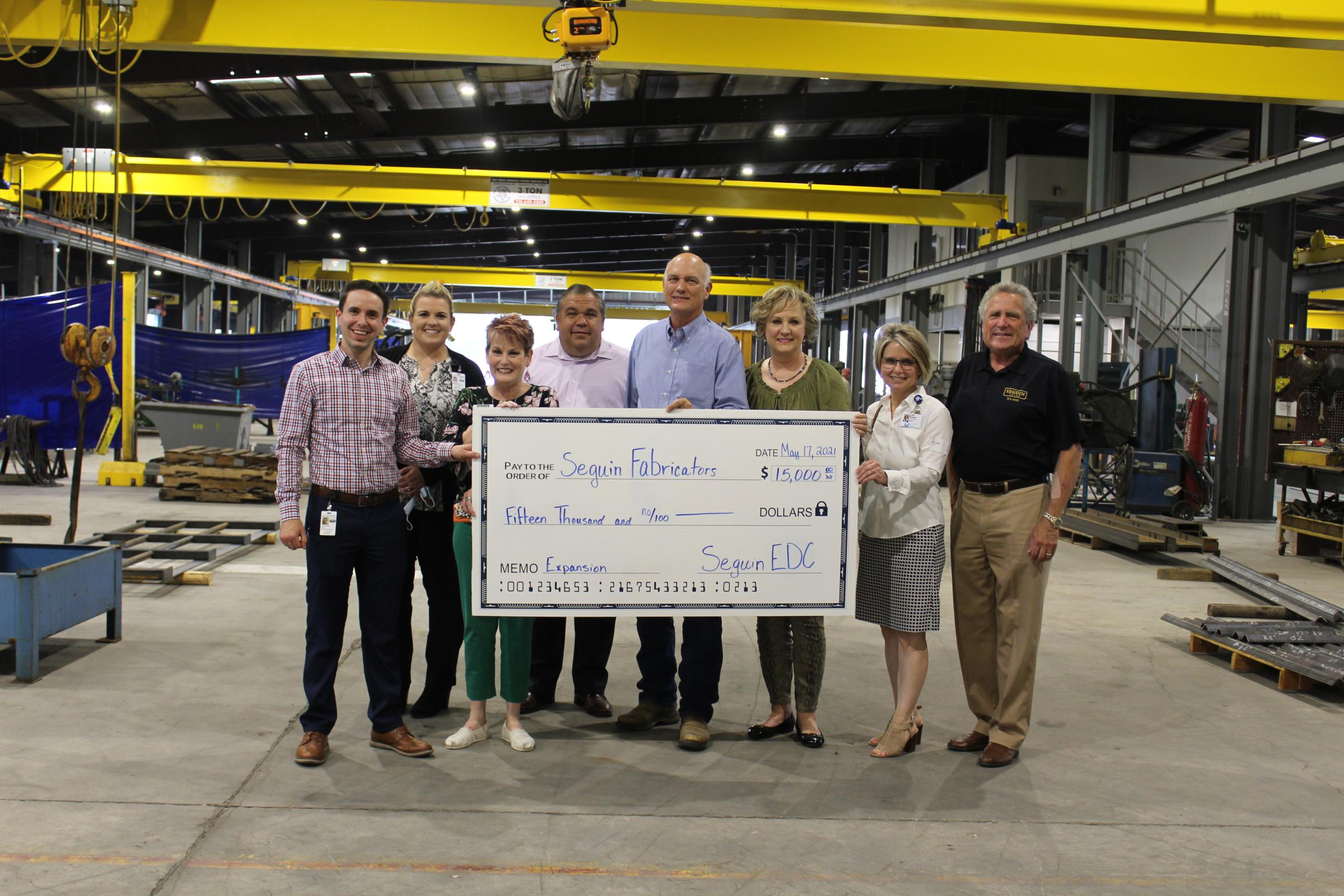 On Monday, May 17th, 2021, the Seguin Economic Development Corporation presented Seguin Fabricators with a check in the amount of $15,000, upon completion of a previously negotiated performance agreement.

Seguin Fabricators, Ltd. Is an established steel fabrication company that serves the industry in water and wastewater treatment plants.  Since 1974, Seguin Fabricators has provided steel fabrication on more than 3000 plant-related projects.  This success has forced Seguin Fabricators to pursue an expansion to support their growing business volume.  Their new tag line is “Building Clean Water” because their fabricated metals are used in municipal plants that take effluent wastewater and treat it to the extent that it is safe and suitable for reuse as reclaimed water.

“After attending a SEDC luncheon several years ago and hearing a guest speaker talk about the expected growth across the region, we knew we were needing to investigate expanding our business to maintain our market share.  We work hard to gain and retain customers and the facility expansion is the first step in meeting the customer requirements.  The second plus is that we have improved employee communication and interaction now that everyone is under one roof instead of being separated in different buildings and offices.” said Randy Smith, President of Seguin Fabricators Inc.

Seguin Fabricators previously operated out of a smaller footprint located at 779 W. Court Street. This facility, while big enough to do its job over several decades, was not big enough to support growing the company. Recognizing this, Seguin Fabricators purchased an existing property located within the Crossroads Industrial Park at 1001 Schriewer Road. The 65,700 square feet facility that sits on 9.38 acres required an estimated $500,000 in improvements to meet the needs of Seguin Fabricators’ operations. Improvements included the installation of bridge cranes and general office area improvements.

The Seguin Economic Development Corporation (SEDC) proposed a performance-based incentive to the Company in the amount of $15,000. In exchange, the company has committed to retaining at least 30 full-time jobs and maintaining the same annual payroll.

“The Seguin EDC is thrilled to see Seguin Fab execute this expansion in the community. We were able to assist in finding them a new location that allowed them to be able to grow. They have a long-standing presence here and we appreciate what they do for the community.” said, Josh Schneuker, Executive Director of the Seguin Economic Development Corporation.

“We appreciate SEDC for supporting home-grown companies and not just new businesses moving into the area.  Their guidance though the process of buying a new facility and selling our old location of 66 years was very helpful.  This larger facility allows us to increase our production to keep pace with growth of this area and across the state.  We have been fortunate to be in Seguin and build a business that supports Dallas/Ft Worth, San Antonio/Austin and Houston markets.” Said Karen Taylor, Vice President of Seguin Fabricators Inc.